Link to this page

Odalisque
Order a Hand-Painted Reproduction of this Painting 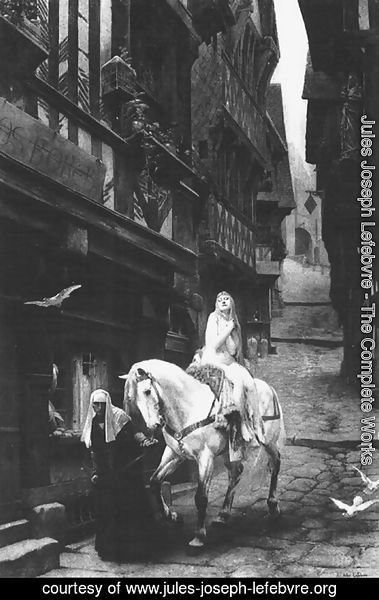 It would be during his stay in Rome that Jules Joseph Lefebvre would find his individual artistic niche. Able to study the great Italian masters, Lefebvre was fascinated by the Mannerist painters, especially Andrea del Sarto. Jules Joseph Lefebvre copied his work avidly and demonstrated Andrea's influence in his painting Boy Painting a Tragic Mask (1863). It was also during this time that his interest in the female nude began, painting his first in 1863. Among other works Jules Joseph Lefebvre did in Rome, Jules Joseph Lefebvre sent the narrative Roman Charity to the salon of 1864 and painted Cornelia, Mother of the Gracchi in 1866. The latter narrative, however, was ill received by experts, arousing overwhelming criticism. That same year his parents and one of his sisters died. These negative events in both his personal and professional life sent him into severe depression.

He emerged from his depression and came back to Paris with a different approach to art and a change of interest in subject matter. Jules Joseph Lefebvre apparently became disenchanted with the traditional formulaic approach to painting, instead turning towards more precise rendering from life. In 1868 Jules Joseph Lefebvre exhibited a Reclining Nude at the Salon, which unlike his last significant work, won him much praise. Two years later, his allegory of Truth became his first great success. A beautiful young woman holds up a mirror (the conventional symbol of truth). This symbol, though, is at the very top of the painting, so, in order to get to it one's eye has to caress the sensuous feminine curves over the length of the outstretched figure. Shortly after the success of this nude, Jules Joseph Lefebvre was made an officer in the Legion of Honor.

What followed in the decades to come were variations on Truth. His many beautiful nudes took the roles of Mary Magdalene (1876), Pandora (1877), Diana (1879), Psyche (1883), and Aurora among others. His nudes became so famous that his only rival was considered to be Bouguereau. Unlike Bouguereau's figures though, Lefébvre used a greater variety of models, which can be seen in his work. 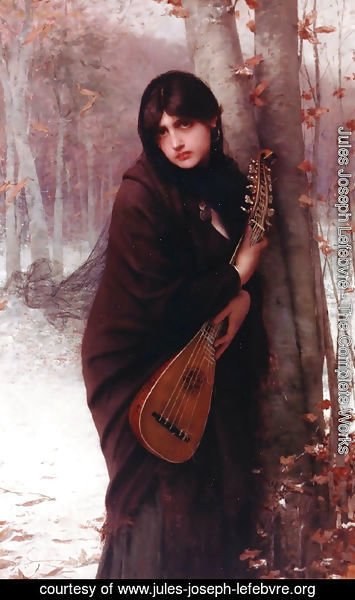 It is not surprising then that Jules Joseph Lefebvre exhibited seventy-two portraits at the Paris Salon from 1855 to 1898. Most, of course, are of women. Among those who sat for him include his daughter Yvonne, the Imperial Prince in 1874, and the novelist Alexandre Dumas (1869), who also seems to have admired his nudes, purchasing a Femme Nue in 1892.

What was admired then about Lefebvre, and can be admired today is the idealized realism of his figures. His "thousand adorable creatures" are beautiful yet individualized. Jules Lefebvre died on February 24th 1912. (From TOPERFECT)

Report an error on this page